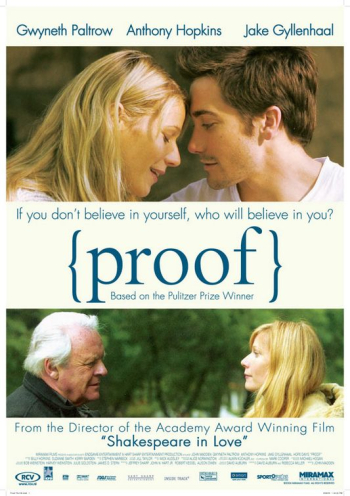 "Proof," based on David Auburn’s wildly popular stage play, is a sensitive take on the same mathematical milieu and emotional terrain that Ron Howard traversed in the Academy Award-winning picture "A Beautiful Mind." Gwyneth Paltrow gives a highly polished performance as Catherine, the loyal daughter to her mentally ill mathematician father Robert (Anthony Hopkins), whose death throws her into a spiral of depression. Catherine grapples with doubts about her own sanity as her narrow-minded sister Claire (Hope Davis) makes claims on their father’s house while posturing as Catherine’s caretaker. Jake Gyllenhaal walks a perfectly ambiguous line as math nerd Hal, a former student of Catherine’s father, intent on seducing his way into examining hundreds of scribbled notebooks left behind by the groundbreaking mathematician.

Director John Madden skillfully liberates the Pulitzer Prize-winning material from its stagebound constraints toward a terse emotional drama that only suffers due to the miscasting of a wilting Anthony Hopkins. Nonetheless, "Proof" is a winning drama that oscillates with confidence and emotional tension.

Having directed Paltrow in her Oscar-winning performance in "Shakespeare In Love," and in the London stage production of "Proof," John Madden keeps a subjective camera on Catherine to amplify the sarcastic wit and intellectual charm that she uses to shield herself from the world around her. With her casual romantic irreverence and moments of inspired clarity, the 27-year-old Catherine is a beguiling creature bordering on the enigmatic. Catherine’s astute verbal gymnastics, that she displays to humorous effect in conversations with Claire and Hal, hint at her mathematician’s mind that gradually becomes the film’s narrative touchstone. 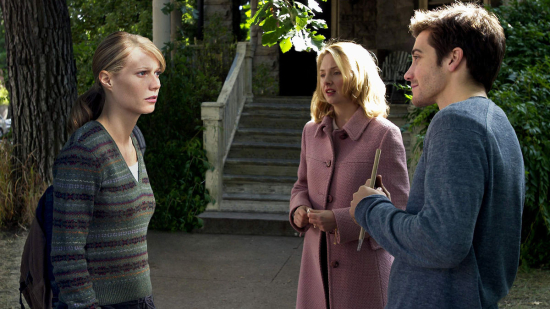 Through seamless flashback discussions with her father, we realize that Catherine’s sustained fear of his genetic predominance of mental illness is a well-founded concern. The degree of Robert’s inadvertent influence becomes the sticking point for the story when Catherine reveals she has authored a mathematical "proof" that is every bit as innovative as her father’s best work.

It’s unfortunate that Anthony Hopkins occupies a role better suited to an unknown stage actor who might have brought some unexpected variety to the part. As it is, Hopkins’s British countenance sits at jarring odds to Paltrow’s distinctly American demeanor. Hopkins resists creating a character, choosing instead to rely on his bag of well-worn vocal inflections to indicate a nagging confusion about the world around him and his character’s mental limitations. His scenes support the story, but never rise to any remarkable degree of emotional impact beyond what we recognize through Catherine’s reckoning with a man she admires and fears. 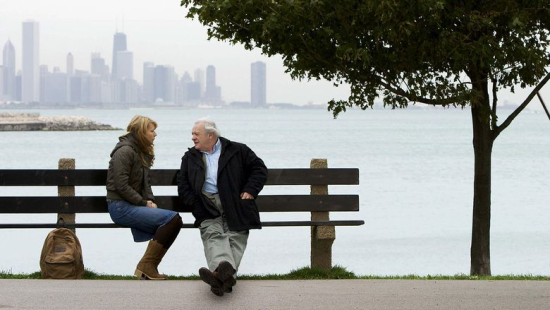 The film’s ultimately satisfying title gathers meaning as the story unfolds. Catherine is searching for any kind of evidence that she’s not doomed to suffer from the same mental illness that overtook her father. But she’s also inextricably driven to completing the same kind of attention-grabbing math proofs he completed. And yet it’s only by imaginatively tapping into her memory of him that she accomplishes the proof that no one near her believes she could have authored. Catherine herself struggles so much with the question of whether she or her father wrote the earth shattering proof that she retreats for several days to rewrite the complex formula from scratch. 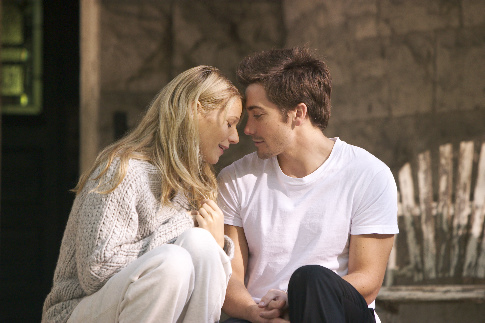 A heartbreaking moment comes when Hal and Claire show their lack of belief in Catherine’s ability to have written such an ingenious math proof. We witness an immediate disconnect between the romantically driven Hal and his more opportunistic side that rankles our hopes for their relationship. More significantly however, the moment proves Catherine’s initial interpretation of Hal’s ulterior motives as correct. The movie shows us in a very literal way just how elusive finding proof of intention can be.

Get cool rewards when you click on the button to pledge your support through Patreon. Thanks a bunch pal!