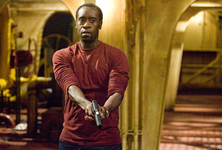 Don Cheadle turns in yet another tour de force performance, this time as Samir Horn a former U.S. Military operative closely connected to a terrorist group committed to carrying out bombing missions around the globe. Writer/director Jeffrey Nachmanoff (screenwriter on "The Day After Tomorrow") crafts a taut thriller that delves deeply into the mindset and methods of a terrorist cell intent on striking ongoing fear into the hearts of the western world. Disenfranchised and polarized, Samir acts on his interpretation of Muslim beliefs that disguise his buried motivations. A team of FBI agents led by Australian actor Guy Pearce as agent Roy Clayton, close in on Samir as his cell plans a devastating synchronized attack on America. "Traitor" is an intense and highly politicized film that dares to look at more than a few sides of an ideological battle that rages throughout the world.

Listed below are links to weblogs that reference Traitor :