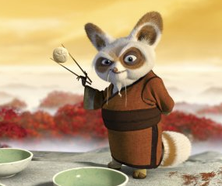 Jack Black inhabits the animated panda called Po with so much of his signature whimsy that audiences get a double dose of Black’s comic persona. Po is an adopted child to a family of Chinese cooks and is expected to carry on the family business, but Po dreams only of becoming a great Kung Fu master. At a high mountain temple, lives the great turtle master Oogway (voiced by Randall Duk Kim), who chooses Po to become the temple’s new Dragon over its highly skilled "Furious Five" monks (voiced by Angelina Jolie, Jackie Chan, Lucy Liu, David Cross, and Seth Rogan). In order to protect the temple from the wrath of escaped prisoner and kung fu tiger Tai Lung (voiced by Ian McShane) Po must master the Secret of the Dragon Scroll with the help of Master Shifu (voiced by Dustin Hoffman). In spite of its strict adherence to limited formula constraints, "Kung Fu Panda" is an enjoyable kid’s movie full of zippy cartoon imagery and heartfelt vocal performances.