« THERE WILL BE BLOOD — CLASSIC FILM PICK | Main | Nanking » 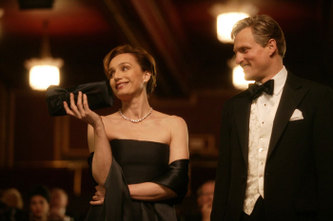 "I'm not naive; I'm superficial" is how Woody Harrelson’s Washington D.C. son of privilege Carter Page III describes himself to deflect the gravity of a murder investigation in writer/director Paul Schrader’s disappointing finale to his lost man trilogy that includes "American Gigolo" and "Light Sleeper." The gay bon vivant son of a respected and deceased liberal Virginia senator, "Car" pretends to sell real estate but spends his time stirring gossip with the wives of D.C. powerbrokers, with whom he plays canasta and chaperones to social functions as a foil against scandal. But scandal finds Car when his favorite wife Lynn Lockner (Kristen Scott Thomas) discovers the murdered corpse of her weekly lover, and Car willingly takes responsibility for the discovery. The movie lags as Car and his attorney battle a nasty district attorney intent on pinning the murder on an innocent man. Harrelson’s overly pronounced southern accent doesn’t come close to its alleged Virginian origin in a slight murder mystery where we care nothing for the victim, the suspect, or the identity of the killer.

Listed below are links to weblogs that reference The Walker :