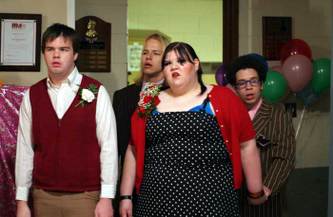 Amateurish to distraction, this modern-day satire about growing up gay in a small town has such a minimal pulse that you may well wonder if first-time writer/director/actor Ash Christian didn’t burn his script before shooting began. Christian plays Rodney a virginal and gay high school senior who dreams of moving to New York and performing on Broadway. Rodney finds some consolation from his dead-end existence with his best friend Sabrina (Ashley Fink), an overweight girl raised by lesbians with whom he feels a deep affinity, and with Joey a British newcomer at school who exposes Rodney to gay nightlife. The belief that all misfits have "an inner fat girl" is the intrinsically second-rate theme that drives this navel-gazing expedition pretending to be a coming-of-age comedy.Even an engaging supporting performance from Tarnation’s Jonathan Caouette doesn’t do a damn bit of good.

Listed below are links to weblogs that reference Fat Girls: